The section of the defensive walls joining the north-eastern and south-eastern bastion, that is, the eastern curtain wall, was erected before 1631. The external wall is slanted, lined with brick. There is a paved walkway on its top. On the wall, there is a huge open air altar, at which particularly ceremonial services are held, gathering crowds of the faithful on the ”Pod Szczytem (Under the Top)” square beneath it. From there, there is a view on the Avenue of the Blessed Virgin Mary – a representative boulevard running from the centre of Częstochowa towards the Jasna Góra monastery. 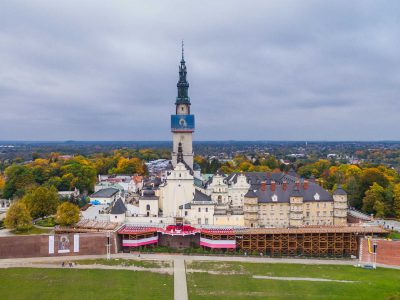