From the south, on the axis of the curtain wall, there is the main entrance to the Jasna Góra sanctuary. It is entered by a complex of 4 gates joined with walls protecting the passage, established on the arch leading from the south-east towards the north, with a pentagonal ravelin, on whose sides there are two central gates. It was created between 1720s and the second half of the eighteenth century. At the south-western side of the ravelin, three bells are suspended on an iron structure – “Jesus Mary” from 1544 with “Mary” and “Paweł” from 1912. 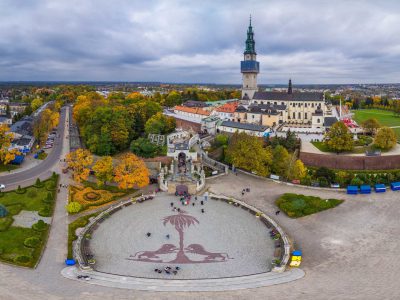 Square before the gates

Since 1906, before the Lubomirscy Gate, there is a round, slightly elevated square surrounded with a railing

The first gate was funded by Jerzy Dominik Lubomirski, Voivode of Kraków. It was erected by Jan Chrzciciel Limberger

The Gate of Victorious Mother of God (Stanisław August)

The second gate in the south-eastern face of the ravelin was erected in 1767, in anticipation of the arrival of king Stanisław August Poniatowski.

The Gate of Our Lady of Sorrows

The third gate in the northern wall of the ravelin comes from the years 1631-1641, but it was rebuilt by Jan Chrzciciel

The fourth gate, in the form of small three-storey building on a rectangular plan, was erected in the years 1631-1641